Mortal Kombat is a TV game remaking the original Mortal Kombat arcade game. It was made by Jakks Pacific & released in 2005. It also works with 2-players with the second player controller.

This is one of only two TV Game controllers to receive an M rating from the ESRB, the other being World Poker Tour.

The game is emulated starting with MAME version 0.219.

This is a convenient, stylish and very responsive controller, which is also a game console. It can be connected directly to the TV and enjoy the game. Even a two-person game is supported, for this, the player needs a second controller and a special cable.

In its form, the controller resembles the Sega Mega Drive/Genesis joystick, is well balanced and comfortable in the hands, but the similarity ends there. On the left there is a cross, allowing you to accurately set one of 8 directions. The Mortal Kombat logo is extruded in the middle. Active gamers have every chance to earn a coin in the form of a dragon. There are 5 buttons to the right, and this is perhaps the weakest point in the design. Multi-colored buttons look very poor. In the middle is the logo of the game, and above - a small control panel stylized as a gaming machine: Start/Pause button, power indicator, switch and reset button.

At the back, there is a connector for connecting a second controller, and wires for connecting to a TV via an RCA connector. There are only two connectors, yellow for video and white for monaural sound. The length of the wires is about 2.5 meters (8 feet). The picture on the TV screen is quite clear.

In the lower part of the controller there are immediately two battery compartments. The central one is designed for 4 AA batteries. The smaller one hides a battery that supports memory: CR2032, it is included in the package. Connecting an external power supply was not provided, and the instructions do not recommend the use of rechargeable batteries,so that batteries are probably the main expense. They are enough for 4-6 hours of continuous play.

The Midway logo clearly indicates that the game is licensed.

The kit also includes a warranty card, a setup guide and a guide to the game itself, which describes all the tricks, including fatality.

The packaging shows screenshots from the arcade version.

The cable for connecting the second controller is very similar to a headset for headphones, and probably in peacetime it can be used to transmit music. Length - 6 feet, this is 183 cm. By the way, Mortal Kombat is the first game from Jakks Pacific to allow linking controllers together with the possibility of playing together.

Such portability allows you to connect to the very first TV you get, or even to the drop-down screen in the car.

Sold at least two versions of this console. For example, one of them was simpler, without a corrugated cross. There are versions localized for the European market.

The game, costing from $20 to $25, received an age rating of M, and is intended for gamers 17 years and older. The second game from Jakks Pacific, which received a similar rating - World Poker Tour.

This is not an emulator, but a full-fledged console, built on a processor quite rare in the modern gaming world from Sunplus. The MAME emulator in the first half of the 2000s was already quite mature, but at that time for $ 20 it was unrealistic to pack a computer in a case from a joystick.

When porting, something had to be sacrificed forever. The colors are not so diverse, the background is static, the characters are not the largest and without shadows.

Backgrounds in the game are noticeably simplified. Instead of 4-5 scrolling backgrounds that create the effect of depth, there are flat and greatly simplified, almost static backgrounds. For example, the monks aren't completely animated and don't applaud at the end of the round. Due to the lack of layers, silhouettes floating on the background of the moon of the "The Pit" level sometimes block the bridge. The lack of depth is also noticeable in the Pit itself, where some spikes are unnaturally behind the fighter’s sprite.

The number of colors on the screen rarely exceeds 150. In fact, approximately the same number of colors was shown on the Super Nintendo screen, however, for some reason, the picture looks poorer, it clearly lacks color diversity. Visually, this is the Sega Mega Drive level, which, for a minute, used 3 times less colors to draw fights! The version of the game for DOS, unlike them, with its 256 colors, looks very profitable, the difference with the original is no longer noticeable, despite the fact that there are more than 2 times less colors.

Representatives of Jakks Pacific said that the reason for many restrictions is the capacity of SRAM and ROM, the game had to literally be pushed into the chip in order not to go beyond the $20 solution. The task was to fit an 8-megabyte game in 4 MB, that is, to halve it. In the process of porting, the developers almost said goodbye to the seventh fighter, but as a result, a reasonable decision was made - to leave the fighter, and cut the backgrounds.

The animation of the biographies of the tournament participants also fell under the knife, it was replaced with a static picture. Completely removed the photograph of Goro.

For example, due to the smoothing of the TV screen and the peculiarities of the human eye, the picture is still not so bad, but there is a feature in Mortal Kombat for Jakks TV Games that is unique to disk games.

If you defeat the first opponent in the Endurance match, you can notice delay in the game. No, do not think that a processor with a frequency of 27 MHz can not cope with another character on the screen. The pause is due to the fact that the processor on the fly unzips information about the fighters. The sprites and skills of the fighters are stored separately, so first the graphics are loaded, then the logic. This gives an unexpected advantage to the players. The second fighter jumps into the arena and the gameplay pauses for half a second. At this time, you can launch a fireball, harpoon or freeze the enemy, because in fact the game pauses only after the message "Loading..." appears, but it is not immediately displayed.

For obvious reasons, the blood and gore were left untouched, however, they could be turned off by soldering the corresponding contacts on the board. On sale you can find both versions - cruel and bloodless.

Most of all, this port is disappointed with sound. The melodies are identical to arcade ones, however, they resemble the sound of a simple sound card that tries to play MIDI. The lack of full-fledged musical instruments is felt very strongly and cuts the ear. Who is to blame - the Dutch freelancer, programmer, or is this a feature of the iron console - is not known.

Sound effects also lost something when porting, but this is not as noticeable as in the case of music. Some effects, for example, the sound of falling bones were not realized at all, and the sound of Goro hitting the enemy with his hands perplexes him with his absence.

But with the control there is a complete order. It is safe to say that the fighters obey as well as in the original. The only thing that will have to adapt to the block button, which is located in the middle. Perhaps because of this, the control is slightly changed. For example, Sub-Zero’s Slide is performed without holding the Back button. And to perform Sonya’s Legs Grab, you don’t need to keep the Down direction. D-pad has optimal rigidity and allows you to clearly choose one of 8 directions.

As in the arcade original, the hi-scores are saved, however, there is no possibility of choosing the level of difficulty.

In the attraction mode, mostly Johnny Cage’s duel against himself is often shown, while with intelligence, for some reason, both fighters don’t shine, exchanging fireballs.

In fact, despite the fact that the programmer verbatim rewrote assembler instructions for the new processor, without changing anything, the balance of the game was badly upset. Using only Sweeps, you can pass the half of the game without straining. Add here cheating fireballs of Liu Kang and go through the second half of the game. Difficulties will begin only in Endurance Matches, and it will especially get in the battle with Goro - the giant gets even where his sprites don’t reach, and to make him a Sweep is simply unrealistic.

Graphically the game is closer to Sega Genesis and Amiga, in control it is close to the arcade original, but the sound has nothing to compare with, perhaps this is the worst sound from the well-known "older" implementations.

At first the game was developed for the Sunplus SPG200 chip (or even SPG100), but before the start of sales it was transferred to the Sunplus PAC300 (SPG240, specifically, SPG243). The following information is indicated in the MAME source code: SunPlus QU7073-P69A - this is probably the marking of the chip.

ROM has a capacity of 4 MB, which is 2 times more than a typical game from Jakks TV Games. 256 Kb of RAM SDRAM is actively used for graphics decompression. NVRAM, according to MAME, has 256 Kb. This point is still not very clear, why is there so much memory, if 256 bytes would be enough for keeping records? Maybe there was an opportunity to save the gameplay?

On any of the title screens of the game, enter the following sequence:left, right, up, down.

This test menu checks the ROM checksum, color and sound. A Sub-Zero sprite flies across the screen. There is some hint on entering the password in the menu.

Earlier attempts to enter the EJB Menu have failed.

To our great regret, there is no scanned documentation on the Internet, so if you find it somewhere, be sure to share it with us (upload here, post link, or send to tv-games(a)mail.ru. The fact is that combinations of some techniques are somewhat different from the original ones.

In fact, there is a catastrophic lack of information on the Mortal Kombat Plug & Play hardware configuration and specifications from Sunplus. Whoever has - please share with us. 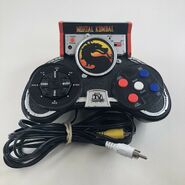 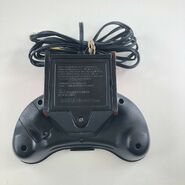 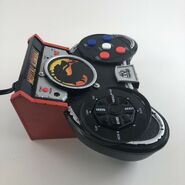 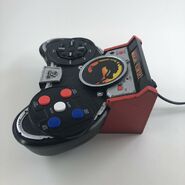 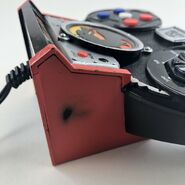 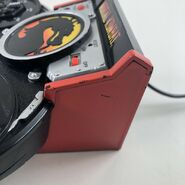 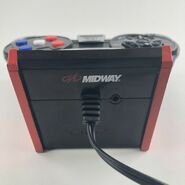 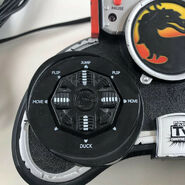 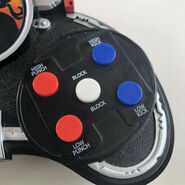 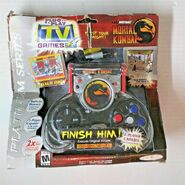 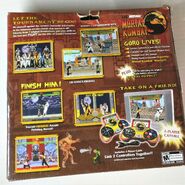 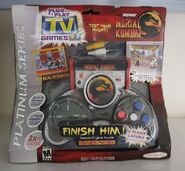 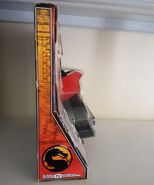 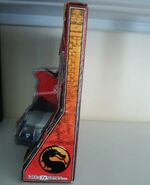 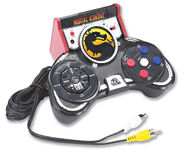 Add a photo to this gallery
Retrieved from "https://plugplaytvgames.fandom.com/wiki/Mortal_Kombat?oldid=5289"
Community content is available under CC-BY-SA unless otherwise noted.